Description: Rare sponsorless away shirt as worn by the side during 2004/2005 campaign when The Addicks went on to finish 11th in the Premiership. Rommedahl moved from PSV in the summer of 2004 when he signed a four-year deal. Jerome Thomas spent 4 season at The Valley making over 100 appearances and was particularly good at scoring against Spurs (3 of his 7 goals for the club).

Features: Hand signed by the explosive speed merchant and Danish international star Dennis Rommedahl #19 and a promising up-and-comer Jerome Thomas #14. Signed by a fan at meet-n-greet in 2004, comes from a private collection. 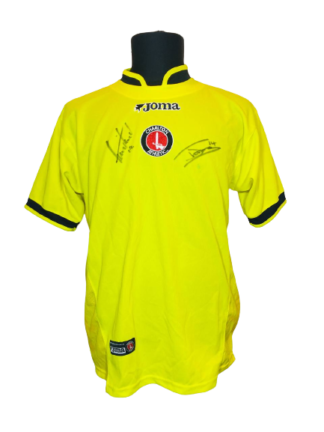