Description: Rare away shirt believed to have been worn by Mykola Ishcenko in a 1/4 final against Barcelona at Camp Nou on April 6th, 2011. The 2010/11 European campaign is the most successful in Shakhtar’s history as the side finished the top of the group ahead of Arsenal, Braga and Parizan, and reached the Quarterfinals after defeating AS Roma in the Round of 16.

Domestically “Hirnyky” completed the double by winning both Ukrainian Premier Liha and the Cup.

Mykola Ishchenko only made 14 appearances in all competitions that season, two of which were against Barcelona in UCL 1/4 finals. 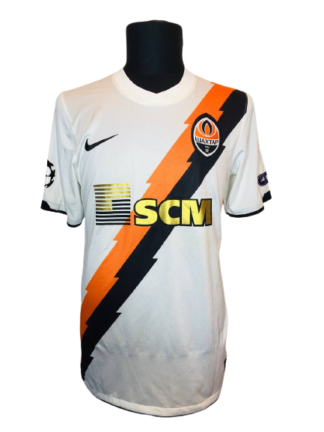