Description: Yellow shirt as worn for nearly all of the early 90s as either away or third kit. During this period the North Londoner’s reached two FA Cup Semi-finals and a UEFA Cup Winners Cup Quarter-Final where they lost out to Dutch side Feyenoord. The 1991-92 campaign would be Gary Linker’s final at the club, netting 28 times in the First Division and scooping the Football Writers’ Footballer of the Year award.

Condition: Bright colours, light wear to the crest and the collar, sponsor is printed within the material, nice material feel with some light tiny bobbling to the lower half. Great wearable/collectible condition (8/10). 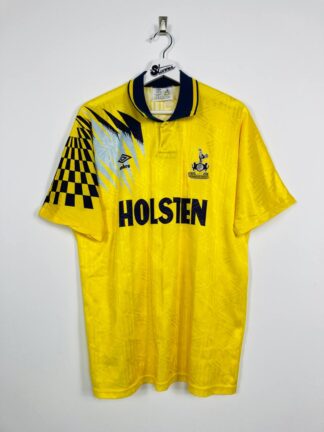